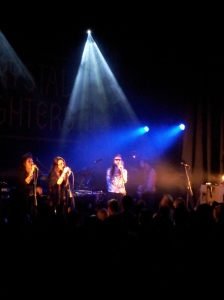 Last Friday I went to see Crystal Fighters with absolutely no expectations. To be honest, I only knew one of their songs, it was an acoustic version and I had heard it so many times that I was completely sick of it. I didn’t have any good reason for going to the show. First two times it was mentioned to me I was sort of, “eh, maybe”. They wouldn’t be quiet about it though. So when I sat down on my back stoop one morning and got a text from yet another friend asking if I was going, I finally relented. FINE. It’s been a long time since I found myself leaving a show completely gobsmacked by the band. How long had I had my head up my ass?

I knew more of the opening act, Alpine, than I did of Crystal Fighters, so I figured at least I would be seeing them and whatever happened, happened. When CF took the stage I couldn’t tell if the guitar player was wearing any clothes. Definitely not wearing a shirt. Definitely killing it on guitar. This was going to be interesting. And it was, the entire time. It was a whirlwind. Many of the songs utilized a traditional Basque instrument called the txalaparta, among others, as a lot of their influences come from that region. I likened it to something the Flintstones would play.

My friend, Sarah, who had been the fateful texter was there with me. Neither one of us had any idea what we were in for. At every break in song we kept saying how….basically just how? How had we not known? How did they do this? How was it that the entire floor was dancing? Chicago crowds are tough to get to break into absolute dancing, but here it was. When they broke before the encore I was asking myself and Sarah, just how were they going to top that? How could it possibly get MORE fun? AND THEN IT DID.

Post-show read-up of the band will show you that many of their songs were based on the lunatic ravings and writings of one of their relatives found after he had died. Ah. Yes. Starts to make sense. You join them in the lunacy. This wasn’t a show I would want to go to alone. This is a show that I will be going to next time they swing through with about 20 of my closest friends. It’s a party show. The more I learn about them, the more I like them.

Their videos are fun to watch as well, here’s the latest, but I suggest checking more of them: